Antonio Jose Beleza of Mozambique’s Institute of Disaster Management (INGC) saw the potential of drones in emergencies and has been implementing the technology following Cyclone Idai.

Antonio Jose Beleza was a flight enthusiast and a member of the Aeroclub in Sofala, Mozambique long before he participated in the drone workshop led by the World Food Programme (WFP) in November 2017. As the Information Management Officer of the Mozambique National Institute of Disaster Management (INGC), he could see the multifaceted potential of this technology.

Still, no one could have foreseen the extent to which he would implement this technology.

When we met to talk about his department’s response to Cyclone Idai, his enthusiasm was still evident in the glimmer in his eye and the rapid-fire snap to his voice. “The large-scale mapping we’re doing now will help the local government to understand the level of exposure to risk,” Beleza explains, referring to local efforts to assess damage and direct reconstruction efforts where they are needed most. Drones have helped draw detailed maps of the twelve towns in Sofala province, hit by cyclone Idai on the night between 14 and 15 March.

When Cyclone Desmond hit Northern Mozambique in January 2019, two INGC staff members were able to gather data with drones, supplying vital information to Copernicus, an ECHO-funded project that analyzes the impact of storms. They were putting into practice what they’d learned in two WFP-led regional drone training sessions, held in Madagascar in September 2018 and in Mozambique one month later.

Three months later, Beleza’s team had expanded to eight staff members with 16 drones. Much of his staff has attended the regional training workshops.

Before Cyclone Idai made landfall, INGC had been tracking the storm, anticipating areas where resources should be directed. When it hit, Beleza’s team made the most of their improved capacity and additional equipment to carry out damage assessments, map affected areas and provide logistical information. This that played a significant role in facilitating a broader relief effort, with support from WFP, Portuguese Police Special Forces and Brazilian Fire Fighters.

The drones fly beneath the clouds, and the resulting map resolution is so clear you can see which roofs have been repaired, which trees still need clearing; you can count the bricks and rubber tires weighing down the tin sheets on the roof.

Special maps of the collated data show which parts of Beira suffered the worst damage, and where resources are needed most urgently. After the initial response, in the early recovery phase, these maps helped the government count the houses that need repair.

Beleza wants to build capacity within government by bringing together representatives from a broad spectrum of ministries . “I want to bring all the sectors on board, so they know what information is available and how to use it,” he says. Some of the local Ministries that have so far made requests for drone-generated data include Land Use, Agriculture, Environment, Rural Development and others.

In this emergency, WFP and INGC are following the drone coordination model by ensuring safety protocol is abided by in accordance with Civil Aviation Authorities, as well as sharing information among humanitarian actors. UN agencies, government entities and NGOs can all request information.

“I want to bring all the sectors on board, so they know what information is available and how to use it,” says Beleza.

For example, local health authorities along with the Logistics Cluster, Shelter, and UNDAC, among others, requested data to fight malaria and cholera. “We provided information for the Health Sector,” Beleza explains. “They came to us and asked to see which houses had rooftops so they could spray for mosquitoes, and where there was stagnant water to prevent water-borne diseases.” Drones are quick and cheap to fly, and can be sent out repeatedly as the situation changes over time. As cholera rates increase, the timely gathering of this data takes on ever greater importance.

Drones create digital elevation models by triangulating, or cross-verifying, a single point across multiple maps to determine altitude. The artificial intelligence programs that read the maps use the overlap among photos to do this. Comparing millions of these points creates an ‘orthomosaic’, color-coded according to height. ‘Ortho’ comes from ancient Greek and means upright, while ‘mosaic’ comes from Latin and suggests a work of art made from small squares — in this case, pixels. One pixel on a satellite map shows 20 centimeters of land. The drone-generated maps allocate one pixel for only two centimeters: ten times clearer.

In addition to the interventions mentioned above, INGC is using drones for monitoring and evaluation, assessments (agricultural, mangrove, food stock damage, among others), disaster risk mitigation, and tracking the overall recovery progress. Other plans include scouting out optimal areas to plant mangrove swamps to prevent desertification and flooding, as well as pinpointing areas where deliveries of seeds are most needed. This distribution has already begun. Beleza is also focused on the future — being prepared before the next big storm.

According to the UN Office for the Coordination of Humanitarian Affairs, there are 602 casualties of the cyclone in Beira. Beleza, who was promoted during this emergency to Deputy National Director of CENOE, an agency under the umbrella of INGC, is confident that this kind of maps can save lives. “We want to resettle people in what we consider safe areas, so that in the future, they don’t get affected by the same event. We’ll know [where] higher ground is. Experience shows us that some of our resettlement areas were not as safe as we thought they were,” he pauses. “We will not be in the same situation next time.”

The drone-generated maps serve the past, the present, and the future: a record of the damage, a blueprint for where to direct resources right now, and red flags for the next cyclone. 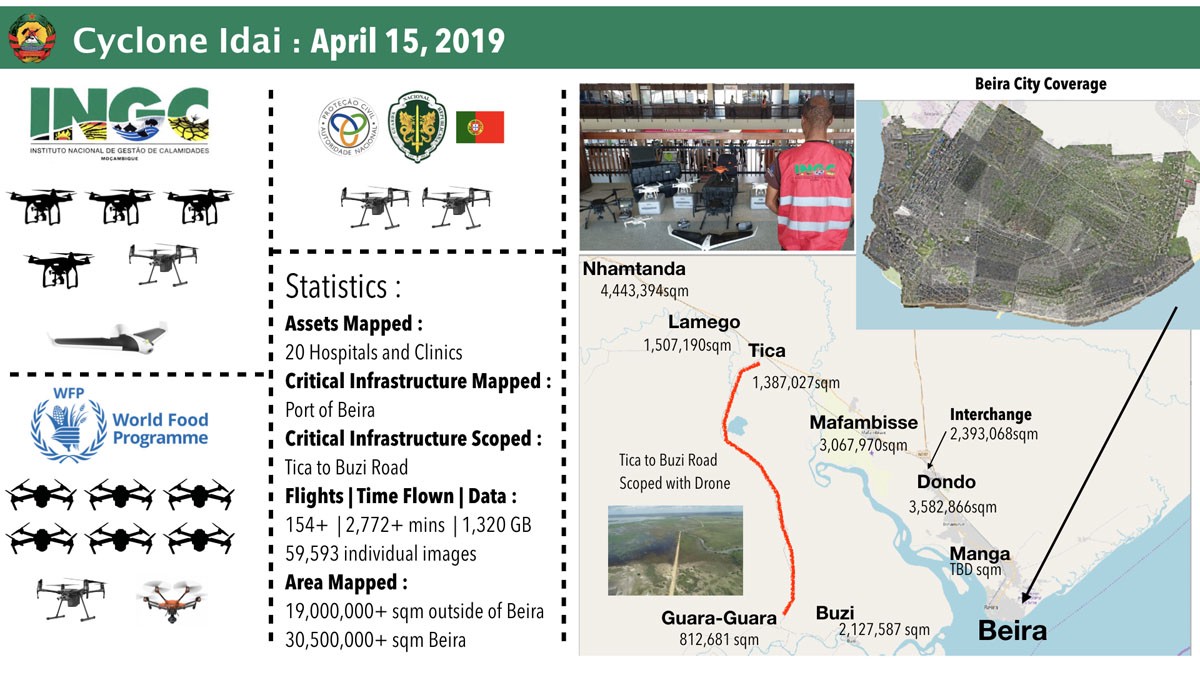